People’s first response has been “Why would Facebook buy Oculus Rift”? They see the current incarnation of Facebook and think, “What can you possibly do with VR on Facebook? Facebook is just a text interface! Are they just going to make VR Facebook games?” That’s really short term thinking. In order to make really ground breaking technology, you have to think long term.

For example, say that you come up with a really great product idea, but it requires a lot more network bandwidth than is currently available to most consumers. In other words, even if you wanted to build it today, you couldn’t because of the lack of network bandwidth that would be required. A lot of people would just drop the idea right there, or wait until that type of bandwidth comes available.

In research projects, you really can’t be limited by that kind of restriction. You have to project where the technology will eventually be and how fast it will get there. Technology like networking will continue to improve for the foreseeable future. The question is how long it will take for it to catch up with your idea.

With something like VR, people always ask “What kind of program can I use this with? VR office where I can see everyone? Third person shooter?” Those are exactly the wrong questions. Sure, you can make a game. You can make a environment where people run around and build things, like in Minecraft. But you can do those on a regular computer screen too, maybe even with 3D glasses. What’s the point?

The question needs to be, how can I make something so compelling that people will use it exclusively. Something so amazing that they only way to really experience it correctly is with what you’ve built. It’s the difference between Second life and Star Trek’s Holodeck.

And it’s only with long term thinking that something like that can be accomplished.

I’m hoping that whatever Facebook has planned, it takes this long term approach. Build something new and different, something so compelling that people need to use this new tech on it’s own.

, those coffee makers that take a little cup, drop it in, and out comes a nice cup of coffee in whatever flavor you like. People buy those coffee makers, and find inexpensive sources for those little cups you drop in, since the Keurig brand isn’t at the price they want to pay.

TechDirt is reporting that Green Mountain Coffee Roasters, the company behind the coffee makers is working on the next generation coffee maker that won’t accept those third party coffee drop-ins any more, if those drop-ins aren’t licensed.

You know, pretty much how a lot of printers work with ink cartridges these days. Except with the printers, if you put in a third party ink cartridge, it’ll probably work, you just won’t have the printer tell you things like how much ink is left.

I imagine this won’t go over very well.

I’ve been seriously considering getting the Nest Learning Thermostat for the house. It’s a learning thermostat, as opposed to a straight programmable thermostat. What that means is that the thermostat learns from your behavior about how it sets the temperature in your house. So, for example, if it learns that you’re away from 8:30am to 3:30pm each day, it’ll readjust the temperature in the house to save some money on your heating and cooling cost. With a regular programmable thermostat, you have to set this up yourself.

One of the ways that it does this is by sensing when you’re not home. There’s a sensor in the device that detects when you walk by it.

One of the reasons I’ve been holding off on getting it so far is that our thermostat is in a location in the house which we don’t walk by very often. So, what to do? 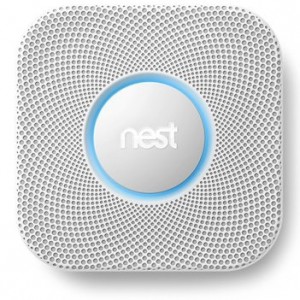 Well it turns out that Nest makes another product, Nest Protect Smoke and Carbon Monoxide detector, which can help. Not only can this device detect smoke and carbon monoxide, but it also has sensors in it so that if there’s a false alarm (like, say, burning toast), you can turn it off by waving your hand.

The cool thing is that the Nest Protect can communicate with the Nest Learning Thermostat, which effectively increases sensor network in the device. That means, even if your thermostat is in a weird place that people don’t walk by very often, walking by a Nest Protect smoke detector will send a message to the Nest Thermostat, telling it that someone is in the house.

Devices that communicate with each other, enhancing their effectiveness. Very cool!