If you’re running into an error where your Ad Tracking request manager isn’t showing up after you update to iOS 15, here’s what you do.

You probably have some code that looks similar to this:

This is Objective-C… sorry for the formatting.

If you had this code in didFinishLaunchingWithOptions, that’s the issue. You should move it to applicationDidBecomeActive instead. I have that whole code block of requesting this in it’s own method, so changing where it was called was pretty straightforward.

Apple announced today that it’s opening up a new program for third-party support for the “Find My” feature on iPhone, iPad and Mac. Via MacRumors 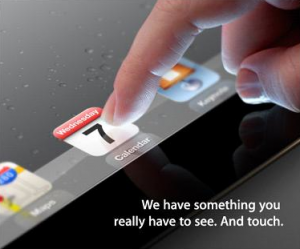 So there’s a rumor going around this morning that the iPad HD will have haptic feedback. That means you’ll be able to feel objects on the screen. Sandpaper would feel like sandpaper, for example. Very, very cool if true.

We’ll see in a few hours!

Well, the big announcement is tomorrow, and everyone expects it’ll be the the iPad 3. From the rumors, it might even be called the iPad HD.

So a couple of questions…

How are developers going to deal with the confusion of all the apps for the iPad that have the tag HD?

How are iPad graphics going to look on a much higher resolution screen?