Could this be what the future of digital books really is? It seems a little odd to me that it would be in a multi-page format, rather than a single page that changes. I thought at first it might be interesting to have a blank book, with each page being a digital display, but…. that would be kinda stupid. A much more likely scenario would be to have posters made from these displays. For advertising, it would mean less work sending people out to change bill boards. For home, you could have large format displays for just about anything you’d want. Plus, since they would be able to change, you can make them time aware, so the poster would change depending on how you usually use it during the day. News in the morning, television schedule or cooking instructions in the evening.

I know you can do all of that now, but the real bonus here is that it’s so thin, you can put the display in places where bulky monitors just won’t fit.

Sooner or later, someone’s going to figure out how to put these things on cereal boxes, and you’ll never be able to walk down that aisle in the grocery store again without having your brain go into overload. 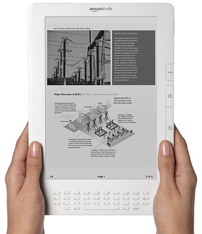 , a large screen version of the popular Kindle 2

. This device has a 9.7″ display (compared with the Kindle’s 6″ display), can hold 3,500 e-books, and has native PDF support. It has widescreen support – just turn the device on it’s side.